The succession of new technologies changes how creators are paid. From the days of vinyl records to CDs; the common denominator is that songs had to be paid for, or waited for on the radio. However, the sudden advancement of the internet, Napster, and Limewire blurred legal boundaries.  Music was free, at a risk: the file quality was reduced, and computer viruses became a problem for downloaders. With this, the rapid erosion of music sales began.

Since this initial downloading ability emerged, two notable revolutions occurred in the digital world with regards to the streaming of music. The first, Apple iTunes, sparked hope for payment to music creators. While the value provided to consumers through access to large digital music libraries was novel for a time, the channel could not prevent the long and constant descent of music sales between 1999 and 2013. Overall revenues reduced 70%; a revenue gap of $12.6 billion in Canada.

At its height today, we find music streaming, the second digital revolution. Instant mobile access allows for access to practically any song, which is free if a consumer listens to commercials. The opportunity cost of time to listen to commercials is marginal enough for a large percentage of the population to opt for this choice, but for the avid listener, music streaming subscription services are a necessity and have aided in the stabilization of the market, as seen by a small increase in music sales in 2015 – a trend which had not occurred in 2 decades.

Discussed in the previous article, outdated Copyright Laws and their failure to adapt to the digital marketplace contributed to the decline in the recording industry’s revenue.  The industry is simply unable to achieve fair compensation with sites whose primary value propositions include freemusic, such as YouTube. This site claims to be a passive intermediary between the creator and the listener, protecting itself in the safe harbour, where very low royalties are paid out to creators. 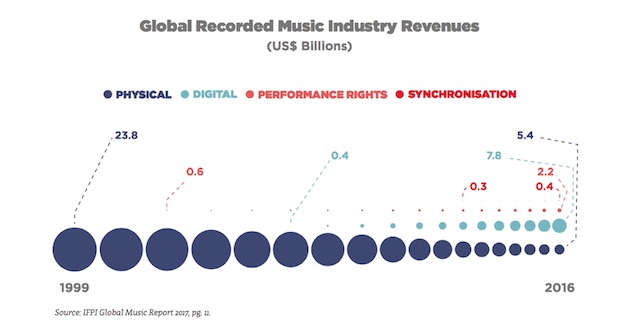 Because of such consumer based channels in a technology driven society, artists possess the capability to record, market, and sell music directly without the assistance of a record label. Of course, the experience and connections which record labels possess is unparalleled, and as such, are desired by many entry level artists with goals of kick-starting their careers. The unfortunate truth is that record labels continue to operate under outdated government regulations. Over time, this created a multibillion dollar Value Gap, eliminating thousands of funded jobs, thereby creating resistance to launch entry level artists into the middle class. For a label to break an artist, the cost can be upward of $2 million – a cost which does not align with the current financial state of many investors.

Easily accessible digital streaming has many additional implications, including a hefty drop in the portion of music consumption which occurs on formats which pay creators. It is concerning that YouTube remains the dominant platform for the ‘under-30’ audience, the future market of music.

Naturally, because music is more accessible than ever, regardless of age or disposable income, the consumer trend in music consumption has grown significantly. In fact, free music on YouTube is the main reason survey respondents cited for not using a paid subscription streaming service. When there is little differentiation between products, consumers use the price as a comparison point – “free” wins almost every time.

Free streaming is of increasing concern as “stream ripping”, a new piracy technique, gains traction – it’s the process of saving streaming media to a file. Youtube-mp3.org, was a stream ripping site which was shut down by lawsuit in September, after serving 60 million monthly visitors copying millions of tracks. The statistics are shocking: 40% of survey respondents pirated music in 2017, and stream ripping is up 5% globally from last year. The process has become the new Napster, amplifying the Value Gap.

Taking online efforts into account, Google claims to have paid US$1 billion to the music industry in ad revenues in 2016, and states that YouTube is used mainly to expose artists to consumers. According to their May 2017 study, removing music from YouTube would shift listeners to radio, but would also increase pirated listening by 29%, with a mere 15% choosing to switch to more expensive streaming services.  There is, however, incongruity in this argument.  Though $1 billion sounds impressive, it is a relatively small return for the commercial exploitation of creators’ music when considering the revenues that have been prevented by this free digital environment.

As mentioned above, under protection of safe harbour rules and exceptions, YouTube is shielded from liability for what flows through it, and therefore holds bargaining advantages with right holders. YouTube and similar streaming sites create a barrier to growth of licensed music streaming services – something never intended in the original framework of digital law.

YouTube’s music head disclosed that 80% of watch time on the site is directed traffic, yet the 2017 Ipsos survey found that 80% of Canadians prefer to use YouTube for music they already know. YouTube’s statement distracts from their failure to pay a fair, market based price for the exploitation of music.  Fundamentally, YouTube hinders the development of a sustainable digital music market by not licensing music and undercutting the providers of material which, ironically, supply site and attribute to its consumer appeal.

The most effective solution to the substantial Value Gap is indisputable. In a society where digital advancements occur dynamically and consumers learn to attain content for free quickly, legislative action is required. The consequences of failing to implement updated regulations puts the music industry at major risk.